During the day, the beautifully furnished, immaculate rooms of our house were often empty, but there were always several people in the kitchen. In addition to the six or seven permanent staff, young country girls would come around the back door, and work for us for a time, but they didn’t last long. They were disrespected by the incumbents; all the way from Hong, who yelled at them, to Xiao Liu who passed on dirty jobs to them, or, if they were pretty, groped them. Someone was always eating with chopsticks out of a big bowl. From an early age I learned that at home in the kitchen, one could eat whenever, and that only my parents followed set mealtimes.  I also learned that set meals were less tasty than the spontaneous meals and snacks erupting regularly in our kitchen. Hong might return from the market with a huge slab of pork fat slung over his shoulder, which he cut up and rendered to make the lard we used for cooking. I would wait for the cracklings he’d fish out of the boiling oil and flick out into the air for whichever kids were around to catch. As well as myself, there would usually be a few children parked in the kitchen while their parents did chores in the house and grounds. We’d shriek, tossing the hot, crunchy bits from hand to hand till they were cooled off enough to eat. Or Hong might sauté some yolks found in a hen’s carcass and look around to see who deserved them. Hong liked an audience when he cooked, so he always had some extras to give out. He also needed an audience for his frequent rants, often addressed to vendors who came to the back door with their goods. I used to wonder why the egg lady bothered coming back. She would arrive with a big basket of eggs. A deep bowl of water was placed on the floor, and one by one her eggs were lowered into it—sometimes one would crack, and there would be an argument as to whose loss that would be. The purpose was to check each egg’s freshness. If I remember, a fresh egg lay on its side at the bottom of the bowl. The rest were subject to negotiation. I got the job sometimes of egg testing while the lady yelled “they were all laid this morning! Don’t waste my time! Get your eggs elsewhere!” About half the eggs were rejected with drama on both sides and the whole event was repeated the following week. Sometimes, right after the egg lady left, Hong would crack a few of the eggs into boiling chicken or pork broth (always on hand) with a few fresh noodles and some chopped scallion. He’d hand around bowls of the broth with a poached egg floating in it. You pierced the yolk with your chopsticks, stirred and slurped up this treat right then and there.
Another vendor event was the crab guy’s arrival. Up to a dozen live crabs were stacked on top of each other and tied together with string. They formed a tower, spewing foam and extruding hundreds of struggling claws from top to bottom. The vendor stood, calm at first, a cigarette hanging out of his mouth, holding two or more of these towers. Hong carefully inspected each stack to make sure each crab was alive and deducting for every perceived dead one. Of course, the vendor got more and more incensed, until finally the deal was completed, cigarettes and money exchanged.
As a special treat, Hong would occasionally let me tag along when he went to the market. 36, rue de Boisseizon, where I lived, was a typical French Concession house. It had two stories raised above a flood cellar. There were equally large and gracious homes on either side of the street, which was wide enough to be called a boulevard. But all you needed to do was walk two blocks, turn a corner, and find yourself on the Rue Magy. It was narrow, teeming with stalls, vendors, customers; women with babies slung on their backs, dogs, cats and vermin. Families lived in 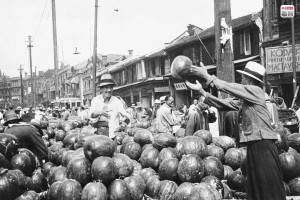 crowded apartments on either side of Rue Magy which was so narrow, cars could not drive through. Because no motorized vehicles could penetrate Rue Magy, there was always a great honking of overloaded bicycles trying to move forwards or backwards. As well, vendors carried huge loads on either end of bamboo poles carried across one shoulder. On one end, there might be a charcoal brazier, already smoking away. Balancing it off on the other end could be cooking pots, hanging sacks of utensils, food ready for cooking. If the vendor was a woman, there could also be a baby in the mix, slung over the other shoulder, or strapped on her chest.