This was the market, where, it seemed, any food could be bought. Hong might head to his favorite fowl stall. It was quite large, with baskets of live birds, as well as stacks of cages crowded with more birds. Hong took an aggressive stance at most stalls. The vendor held out a chicken to a woman in front of us. He actually manipulated the bird and I am sure the squawks were coming from him.

“That chicken is dead” Hong muttered to me and to Xiao, who always enjoyed these scenes. When the deal with the woman was done and the vendor held up a chicken to us, Hong shouted “Put that chicken down.” After an exchange of macho stares, the vendor opened a cage and dragged out a different bird, obviously alive, and Hong reached out and grabbed the chicken by its gullet and gave it a good squeeze. This was to make sure not too many stones had been forced down its throat to make it heavier. The cruel way the birds were treated meant many of them were dead on arrival. We finally got chickens which passed Hong’s test. Ankles strung together, they hung upside down, one over each of Xiao’s shoulders.
Pork came next. Back then, pigs were bred to be big and fat, and their flesh was reddish and solidly streaked with white fat. For Chinese, pork was and still is the ultimate meat. Xiao was loaded up with various cuts over which he threw an old bed sheet to keep flies away.

If it wasn’t a pork day, it could be mutton day, a very smelly stall, or seafood day, the most exciting of all for me. Various receptacles were laid out at the stall—tanks, basins and bowls. They would be hauled to the site daily, and filled with live fish and crustaceans. Executions were held on a big marble slab, constantly being hosed down by an assistant. The scene was bloody and turbulent with splashing water. As usual, Hong was rude as he 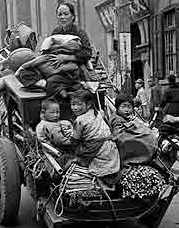 aggressively handled his prospective purchases. He’d grab a big fish by its tail, hold it up, and if it thrashed vigorously enough, he’d hand it to the fish guy to be killed and bagged. Eels were all muscle and had to be wrestled on to the marble slab. A big basin of live shrimp would be emptied into Xiao’s string bag, ready to cleaned and cooked back home.
People were crammed together, arguing, shouting and waving fists, knives and merchandise, dead and alive. It was always my best life experience.