Food at school was totally different. We filed into the gloomy refectory, and took our seats in front of our shallow white porcelain soup bowls at a long, dark table. 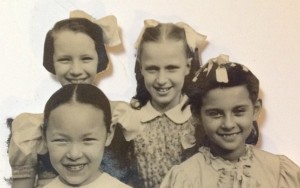 We were about 20 girls of different sizes and shapes, wearing identical navy blue and white uniforms. The lunch was considered part of our education. We were monitored by severe nuns in their black  uniforms that had a stuffy smell especially in the humid summer. We were doled out soup from a big tureen being passed around by a nun. It was lukewarm and translucent…basically colored water. We had to consume it all, moving a big silver soup spoon from front to back until it was all gone. Surely there was something else to the meal…but my memory fails me. I do recall our large napkins that we had to roll up and return to our individual holders afterwards. Then we got up and filed out.

It was wartime by then, and all British and American schools closed, and their teachers and students….if they were British or American…interned in late 1942 in concentration camps on the outskirts of Shanghai. The convent of the Sacred Heart on the Rue des Soeurs in the French Concession was pretty much the only option for Eurasian girls like me.  We were the ones with a non combatant parent in the mix. He would probably be Scandinavian (my grandfather) or Portuguese, or German of course. My parents were indifferent to the meaning of a Catholic education, and so I was tossed into years of catechism, study of martyrs and catacombs, singing of the Mass and mastering the French language.

The relentless repetition of table manner stud y followed by wild kitchen antics once I got home seemed normal to me. Just as normal was my intense seriousness about my obligations as a Catholic child. I carried a vial of holy water with me at all times in the pocket of my serge uniform jacket. After petrol rationing ended my chauffeured trips to school, I’d take the tram or walk, which I preferred. Then, whenever I spotted a small bundle in the gutter that I could identify as a live human…either it gave off a bit of steam in the winter, or seemed to move even slightly, I’d get out the holy water. Kneeling over the bundle and poking around to reveal the baby’s face, I’d baptize it…I’d say a prayer, and then move on. This went on for over a year…about ten or twelve lives spared purgatory or worse, until I was caught out by a family friend.

There were always visible dead people, who had died of exposure or dise 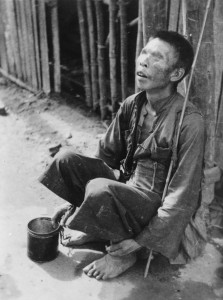 ase, or had been executed and put on public display. There were terribly mutilated people displaying their stumps, their wounds, and piteously begging. Wretched dogs and skeletal cats were also part of the misery I walked by and left behind. Much more real to me were the torture of Christian martyrs and scenes in catacombs recounted to us by our teachers. The sight of real dead and dying impressed me less than the lurid stories of the past.

Photograph Scream of Life by Shafei