The family was well off during my childhood. My father was successful, and my mother soon gave up her secretarial jobs. At home, she carried around a thick notebook, and any servant making purchases for the house was examined and cross examined, with weekly prices compared and noted down, stern accusations and frequent firings. Hong was recalcitrant, of course. My father would always make up the difference later with Hong, and sometimes with other servants. This was another aspect of the battle between my parents. My mother accused everyone doing paid work for us of padding their bills, taking cumshaw, or rake offs.   Dad was always in the background, playing the good guy. He always had a full billfold, and dispensed money freely. “They have their hands held out; they ask for loans which they never repay.  Hans, they see you coming!” my mother would say, “Wait till you’re down and out. They won’t even know you then.” She was right about that.

“Your mother used to pinch your nose all the time when you were a baby,” Phyl said, “she thought your nose was…” 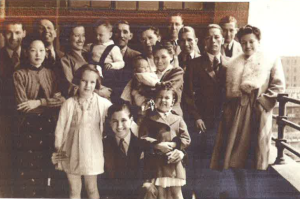 What? Too flat, too long, too wide? I never knew exactly. I was another disappointment. My cousin Sylvia was her perfect little girl. I was way too big. My feet were compared to sampans. “You have to stop growing!” my mother exclaimed. But I kept on until I reached the unheard of height of five foot ten inches by the time I was thirteen.

Yet, my mother was a highly intelligent woman, and so excellent in the jobs she held before I was born, that her employers rewarded her to excess. A Swiss businessman had her report to different hotel rooms daily, where her typewriter was set up for her by his personal bodyguard. “I put my head down and worked hour after hour on strictly confidential material. More than once, we had to make a hasty exit by the back stairs.” Finally, the businessman decamped, disappeared. “He handed me a suitcase before he got on the boat. ‘Di’ he said ‘I can never thank you enough for covering my back time after time.’ The case was full of US dollars. That money got Hans started with the paper box company.”

Another job was as secretary to the CEO of a top American cosmetics company. Here, her job among other responsibilities included buying expensive gifts for wife and mistress. “I was always smartly dressed as I visited expensive jewelry shops guarded by armed Russians. After a while, they knew me, and winked as I went in with my bag full of cash. I got to select this for the wife and that for the girlfriend, peeled off thousands of dollars and made sure there were no mix ups. My boss trusted me to choose whatever I thought was the best, and I must say, I never made a mistake!” My mother was so appreciated, that when this employer returned home before the Occupation, also leaving largess to her, he said, on parting “If you decide to come to Los Angeles, you will make top dollar working for me!” In fact, she did many years later, worked for him for quite some time.

But she was never happy. Nothing was ever right…from the very start. Divorce was not an option back then, but my father managed to slide away from her. She left Hongkong for England, and he was meant to follow, but he kept putting it off, and never rejoined her.

I had left for the U.S. for college not long before, and never lived with her again, either.   My mother wandered, from England, where the climate affected her arthritis, to Los Angeles, where she worked till she retired. She then moved to Guelph, in Canada, where her sister Phyl had settled with family. Phyl was twelve years younger than Di. She told me “I don’t know what would have happened to us kids when our Dad left Shanghai, if your mother hadn’t taken us on. She gave up everything to take care of us. We weren’t grateful then. We didn’t understand where all the money and servants and the house and shop went. Di used to work till the evening, and then come home with a splitting headache, yell at us, and go to bed until she had to get up the next morning to return to work. And she was just a kid herself!” Phyl was the only person who deeply cared for my mother, and actually took care of her until she died. I saw my mother rarely, and when I did, it was always a disappointment to both of us.

She visited me for a week during the years I lived and worked in Paris. She was in her seventies by then, suffering from severe arthritis, and diminished physically and emotionally. I invited her to a Chinese restaurant my friends and I frequented, and things looked promising as a dozen of us sat around a large round table and ordered various dishes. My mother signaled to the waiter with a clawlike hand and said, in Cantonese “bring us a big bowl of boiling water and a towel!” He did so promptly, and my mother took all our bowls and chopsticks and rinsed them, and dried them. The first dishes appeared. My mother signaled the waiter again. She was suddenly her old imperious self. “What is this?” she exclaimed. He tried to explain, but she waved it away. “This is not what we ordered. Take it away. Bring us…” she then continued at length. I sat there, mortified. My French friends were amused. Sending food back to the kitchen was a perfectly acceptable game to them. We finally got what my mother ordered. It was very good, of course. I never wanted to return to that restaurant again, but had to go there for a birthday dinner a few months later. As we sat down, the chef appeared at my side. “How is your mother? When is she coming? What a wonderful lady! We are waiting for her.”

She was dying when I saw her last. She lay in her hospital bed, a tiny, wizened woman. All her anger seemed drained out of her, and she murmured “How are you, dear?” She did not resist when I leaned over and gave her a hug. “You look very lovely, dear,” she said, for the first time in her life.

Harvey family at Christmas at Embankment building.  Joan and Sylvia in front

photo of Joan at 17, leaving Hongkong on a tramp steamer for San Pedro, California