The War seemed to end suddenly. The Japanese vanished from the camps overnight, and the dazed internees straggled out to salvage their pre war homes which had been stripped and vandalized by the occupiers. American tanks full of cheerful soldiers rolled through the city, and people lined the streets, greeting them joyfully. It was a moment full of hope, a brief period after one occupation and before another. The Communists were already heading for Shanghai, but at that moment, few grasped what the future had in store for them. The Americans rained down K rations full of Hershey bars, chewing gum and cigarettes on the happy spectators. The GI’s hauled kids up onto their shoulders, and jumped down to the street and shook hands with and were hugged by grateful people.

Not long after, the motley Eurasian nation began to realize it had to make some definite moves. The Leitao family and their friends moved to Macao, some to Portuguese colonies in Africa. Anglo Indians made their way to England. The extended Klyhn family received notice from Denmark that they were no longer Danish citizens. Always quick on their feet, they began their moves in different directions.

Lawrence and his family were sponsored by his British citizen brother in law, Robert, to emigrate to England. I missed my cousin, Freddie, who had shot up in height like I did. We didn’t do fist bumps in Shanghai back then, but whenever we met, we grabbed each other by the shoulders and did a hopping dance of recognition. We were watched by his brother, who could be counted on to intone “Good things come in small packages.” Larry was short and stolid like most of the other Klyhns.

Peter and his family were sponsored by an Australian cousin, Eddie, and moved to Adelaide. They had lived in a five storey house in Shanghai, and Peter had turned the top floor into an aviary for his finches.   How could anyone forget trudging all the way up the narrow stairs, arriving at an ordinary looking door, going in, closing it tightly, and opening another door, and suddenly finding oneself in a magical kingdom 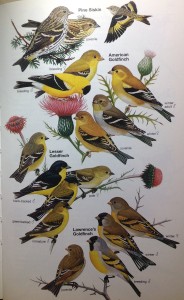 . The whole floor was one brilliantly sunny room with windows all around. Hundreds of tiny, beautiful birds flew all over the place, singing, chirping and perching at food stations. They bathed themselves in suspended water bowls and flapped their wings gleefully afterwards, scattering motes of water which were caught like diamonds in the sunlight.   They would get  into scuffles with one another, and sometimes landed on your head or shoulders, if you stood still. Uncle Peter loved showing off his birds, especially to children. He had another surprise that got us all laughing and screaming hysterically; he would get up close to you and snap out his rack of false teeth.

Harry, as reported by my cousin Ron “was the most Chinese looking of the lot. He became a Communist and went off to Moscow, reason unknown.” This Harry married, changed his name to Li, moved to London with his wife and three children, and became a successful lecturer on Chinese customs and literature. The story of this ex Klyhn and his family is a mystery to me.

My father, Hans, decided to stay on in Shanghai, and offer his services as an experienced businessman to the new regime. Eurasians were NOT welcomed by the new regime. Dad would be expelled and 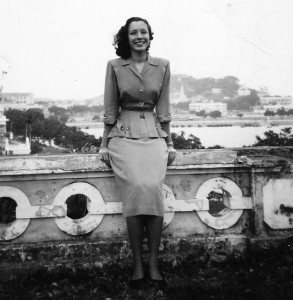 our property confiscated. My mother anticipated this, reverted to her original British nationality, included me, and took off for Hongkong, literally on the last Pan Am plane. We stayed at first for a year with friends in their decaying colonial  mansion in Macao.   All we had was a suitcase each. The seats had been taken out of the plane, and the passengers huddled on the floor, crowded shoulder to shoulder, holding onto their meager belongings.

The Harveys had all been interned as British subjects. They were in poor health at first and almost destitute and disoriented. In later years, their British citizenship would also be rescinded, but by then, they had managed to hopscotch their way to new countries and new homes.

photo of Joan at 16, in the house on the rua de Boa Vista, Macao