My mother was an angry woman all her life. She was the first born child of Mary and James Harvey. 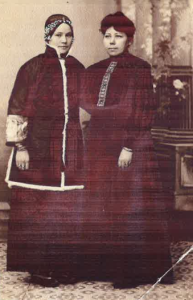 Mary could not have another child for eight years. It was a son, finally, but my mother bore the brunt of her rage for those eight years of frustrated waiting. Daisy (a sweet name for a despised child) was forced to wear boy’s clothing. Mary was more Chinese than Western, so she subjected Daisy to various spells and curses. She dragged my mother to the temple, burning countless joss sticks. “She begged the gods to take me in exchange for a boy…I was right there, next to her. She dragged me to the altar!” Daisy’s life was offered up once more, when her baby brother was accidentally dropped and injured.

My mother insisted I chew several quarter sized calcium tablets every day when I was a child. “When I was five years old, Amah found me under my bed, eating the plaster off the wall. I was seriously lacking in calcium. And that’s NOT happening to you!” She told me her beautiful mother had the servants keep her homely child out of her sight. “I spent most of my time in school. Western school daytime, and Chinese school until evening. My Chinese writing wasn’t good enough for her, so she set a heavy book on my arm. I had to hold the arm up parallel to the page and keep writing.” At eight, my mother had a nervous breakdown and was no longer able to attend Chinese school. She made up for it by excelling in typing and stenography, not realizing that her future would be to support the family with these skills.

“I met your Dad at a dance,” she told me years later, when I was a teenager.

“He married me because he was sorry for me. He was really attracted to one of the Leitao girls.”

I couldn’t dispute this at the time, because for as long as I could remember, my parents had a relationship of bitter arguments and long silences punctuated by fancy social occasions. They were miserable together at home, but were animated and beautifully dressed at their many parties at the Club, at home, or at friends’ houses. After a party at home, my mother would grumble “did you see Harold filling his cigarette case in the living room, as usual?” My dad, who had been the life of the party, was deflated afterwards and just shrugged. He would disappear into his rooms. Doors closed.

Managing five young siblings who had suddenly been deprived of both parents by death and by abandonment,  was a tough call for my mother. She felt her brothers and sisters did not appreciate her efforts; in fact, they all remember her extreme strictness. “I was so afraid they’d end up on the street, in bad company, out late! I had to lay down the law!” 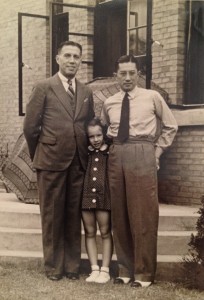 By the time I was born, my mother had been through a few breakdowns, and was absent for the first six months of my life. I had a buxom wet nurse, Mei Lee, who lingered in the family for several years. My mother eventually fired her, suspecting my father of liking her too much. Old baby photos show my mother holding me, but I have little recollection of physical contact with her. My father was always good for a hug when he was around and my grandpa loved playing with us children.

photo of Mary, on the left, with a cousin

photo of James, on the right

photo of my father and mother on their wedding day

photo of grandpa, me and Dad in the garden of 131 Boissezon