In 1947, the Royal Danish Consulate General issued the following notification to each member of the Klyhn family in Shanghai, about 14 of us all together.

In an instant, the six foot four inch Danish father and grandfather, originally from Schleswig Holstein, faded into irrelevance, and we became stateless. What had happened? I try to trace this back, and this is from my cousin, Ron, now settled in Vancouver, Canada. “My grandfather, mother’s Dad, left Schleswig Holstein at the time that local residents had to register whether they wanted to be German or Danish. He was on the Trans Siberian Railway on his way to Vladivostok, so he knew nothing of this requirement. This caused the Klyhn family to become stateless”.   No one could question Lauritz Klyhn as to how and why he happened to be on his way to Vladivostok, as he died suddenly in his forties while on the job at the lighthouse, 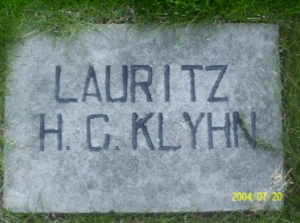 and was buried in Amoy, leaving 5 children under the age of 10 and an illiterate Chinese wife, who, however, he had married legally.

Next, I turn to James Harvey, my other grandfather. He was married to Mary, who managed their dry goods store on Szechwan Road. They had seven children, but Mary died of septicemia while giving birth to their last child, who died at the same time. James didn’t even stay for the funeral, but packed up and immediately got onto a ship for Harbin. 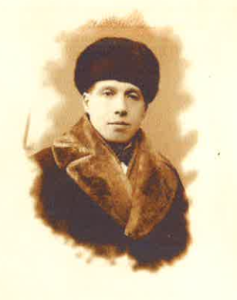 He vanished for nearly ten years. The house, the shop, the horse and carriage and its mafoo driver, the box at the Chinese Opera, also all vanished shortly. My mother took a job as a stenographer at the age of sixteen, and with the help of her Chinese grandmother, took over and managed the little family. So, a sixteen year old girl and her granny pulled the little family together. Ed, the youngest, who was only two when his Dad decamped, always resented my mother’s strict regime…”All I got was a plate of leftover carrots or beets for supper if I came home late from school. And she was a slugger, too!” Di worked hard, and granny cooked and cleaned. Di had had a harsh and loveless childhood herself. All she knew was the self discipline learned from writing Chinese characters with a heavy weight on her arm. The family was another burden she had to bear, and loving did not play a part in it. So, under her care, another lot of penniless Eurasians got a good charity education from Christian missionaries and gradually rejoined the middle class.

After about ten years, Ja 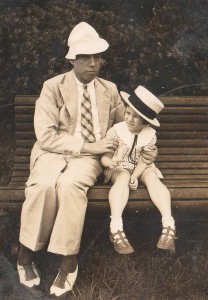 mes Harvey resurfaced, broke, but ready to rejoin his family. Why exactly did he have to leave, what exactly did he do all those years away; he never said…he seemed diminished, chastened on his return. He hung around, making himself useful in the households of his various children, and beloved by their children. James was a tall, handsome man, but not clever. He got along with children, as he was like a child himself.

photo sent by James to family, from Harbin

grandpa James with Joan in the garden of 36 Boissezon