Our family home from the late 19th century was at 234 North Szechuan Road.  It was the first house in the alley.  You entered the front door on the wall of the row of houses, and stepped into a flag stone courtyard. Our water supply was a cold water tap on the right hand corner; all our household water was drawn from this tap. The ground floor was the kitchen and the servants’ quarters.

Up a flight was the middle floor, mainly consisting of a large living room. Hard backed wood chairs were ranged against the wall on either side of the room, with an end table by each chair. At the back was a large wood chesterfield, with a porcelain pillow for reclining.  Not a cushion in sight! No place to lounge or to slouch!

Next to it was a dining room with a large round table and more hard backed chairs. At least there was a pot bellied stove in one corner, but it didn’t do much, as drafts blew through the whole house through gaping windows and doorways. You bundled up in winter, and sweated through the muggy summer. Central heating, air conditioning, double glazing, even doors that closed were unheard of.

The top floor and attic contained our many bedrooms, and above, there was a flat topped roof garden, or sai pang, where the servants hung our laundry out to dry. There would often be a relative staying in one of the bedrooms, often we didn’t realize they were around until they joined us at mealtimes.

My mother had a houseful of servants; each one of us had a young companion, an Ah Mei. The source of these servants was a seemingly constant supply of unwanted girl babies. They were given away, sold, or discarded and left to die in the street. Mother took in many of these children, fed and nurtured them and kept them in the house as Ah Mei’s and eventually as full fledged help, or Amahs. They were taught household skills by the older servants, and mother eventually got husbands for some of them. Later they would come and visit her, bringing their children to show her. Mother got a great deal of satisfaction from this, as well as a fund of home help. My girlhood friend Nell recalled “your living room was always a scene of chaos. Kids would be running around, servants of every age were doing some job or other or chasing the children, and your mother in the middle, looking calm and happy, drinking tea. I always felt that anything could happen!”

My parents had a shop directly across from our home, selling yard goods, perfumes and toiletries, mostly imported from Russia. Other items were obtained “on the side” by my mother, who would go to the wharf with a couple of bodyguards when a large ship came in. She would pack the pockets of her special shabby padded Chinese gown with different denominations of cash, and would troll the docks for sailors who had valuables to sell. There were stories of shipwrecks, kidnappings and general thievery, but no specifics. Mother would come back and produce interesting goods, even expensive jewelry, at times, and there would always be well dressed customers coming around the shop at odd hours to check out this merchandise. I vaguely recall a story of a vanished diamond that eventually turned up in a trouser cuff, apparently dropped by accident. Mother guarded the door and no one could leave till the diamond was recovered. True? Or did I imagine it?

Apart from the bodyguards, who were always needed, as all transactions were in cash, there were several salesmen; it was a very prosperous business. The shop was open in design; you just walked in off the street. The merchandise was displayed in several plate glass cabinets. 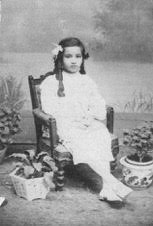 There were no automobiles in our day. There was a good tram service and plentiful rickshaws. My parents owned a carriage and a horse, with a mafoo, or driver on hand to take us wherever we wanted to go. All six children would pile in for a ride to the country with a picnic. These events were never planned; they just seemed to happen in that crowded life we led.

Typical chair/table arrangements at the time

Phyllis; at the photography studio