This collage, made for me by my artist friend, Joan Hall, pulls together a big part of my lineage. 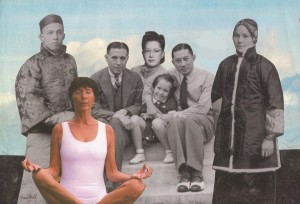 On the right and left, are my Eurasian grandparents, James and Mary, in Chinese dress. Grandfather, again, this time in Western clothes re-appears after a disappearance of many years after Mary’s death. He looks subdued, as he should have, after abandoning his family for years, and then re-appearing, broke. But because of his innate good nature and willingness to do whatever odd job came up, he managed to re-insert himself into the family, living with various sons and daughters, and making himself useful, with few demands. He was a tall, handsome man, with good posture and good social skills. 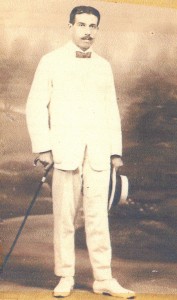 He wasn’t bright, but made up for it with his good looks, amenable nature and his smooth foxtrot on the dance floor. I loved grandpa, as did every kid he met. He was always ready to play games with us, and tell goofy jokes.

There’s my mother, her hair in a stylish updo , looking out with her no nonsense gaze. Then, there’s my father, characteristically with his arms around me.

He would say to me, so often “Don’t worry. Dad won’t let anything bad happen to you,” or variants on that theme. He meant it, and on our last day in Hongkong, as he stood on a swaying pontoon, feeling seasick, watching me embark 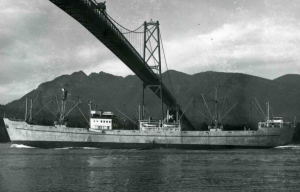 on a ship to California, he stuffed an envelope into my hand. $500 US dollars back in 1953 represented a big part of his meager savings. My mother, whose strong stomach would carry her through many more travels through her life, stood by grimly. As always, she was disappointed in me. I had failed typing, shorthand, sewing and knitting training, all of which might have helped me get a job to help the family out. At seventeen, I had no interest in spending any more time with my warring parents. Earning my living with a proper job was way in my future. I was off to the College of Notre Dame in San Mateo, California, on a partial scholarship. I had to perform some menial work, in return, with my laughable skills. The story of my induction into the real world is not part of this narrative, except that I need to acknowledge, after all these years, the kindly souls who imagined I could do well at a lunch counter, or later as an au pair. The latter work was in exchange for a lovely attic room, when I escaped ungratefully from the suburban College to the wide open world of the University of California at Berkeley. My housekeeping was abysmal, but my hosts were a charming, academic couple, who took a while to wake up to their messy home. This could have been because they spent their evenings at home drinking one martini after the next before slowly making their way to bed. They eventually hired a maid and gently phased me out after a year.

I return to the collage. Yes, there I am, hugged by my Dad, feeling so very protected. Dad, as always, is impeccably dressed. I would squat in the kitchen and watch Xiao Liu polishing Dad’s two tone shoes to perfection. When he was done, I’d snatch them and dash upstairs to Dad’s bedroom. I’d slide open the well oiled doors to Dad’s wall to wall closet. There were shelves for everything. Dozens of pairs of shoes, each ensconced in its shoe tree, suits for every occasion, tie racks, handkerchief slots, socks divided by color, and shirts and more shirts, underwear, and a very special rack on the top for his hats. I always looked for the Borsalino hat I had saved up for with the money Dad used to slip me. When I had accumulated enough, I enlisted Uncle Sam to get Dad’s measurements and to take me to the shop. There I gave my wadded up stash to the amused salesman, and left with a magnificent hat box containing (I believed) a magnificent hat. Dad certainly wore it, and always told whoever was present that it had been my gift. There it was, on the shelf, fitted over its hat shape.

There were accessory drawers, too, for cufflinks, tie clips, watches, and elastics Dad would wear around his upper arms to prevent his shirt cuffs from protruding too far out of his jacket sleeves.   I’d slide open the closet doors and gaze in awe at this presentation of hanging suits, coats and shirts, and shelves and drawers of every size.  Dad was a dandy, and his glossy black, slicked back hair with its side part seemed to stay with him most of his life. My mother, though, was sloppy. My own nature has often been a clash between sloppiness and  tidiness. The latter has won out now that I live in a tiny New York studio apartment.   When my mother got ready for a party, she would carefully apply her make up and fix her hair, often with a hairdresser on hand; wrap a cheesecloth over her face and hair, and then slip on her dress. The wrap prevented any makeup smear or hairdo disruption. Again, dressing up was a process, taking time. Occasionally I was allowed to watch, and perhaps pass a hairpin or so. But while she looked elegant as she left her room, her dressing table was a mess of  makeup, perfumes and various brushes and sponges. Rejected dresses and shoes were scattered all over the room. Amah and a helper would go in after mother left and spend the evening tidying up.

Finally, there is the Joan of today, in a yoga posture, a yoga instructor in New York City. Behind me, the ghosts of my past. The grandparents on either end need their story told, so I’ll hand that over to their daughter, Phyllis.

the Castleville, decommissioned, years after I sailed on it