Hanging out with cousins in San Mateo, California a lifetime later, I was invited to join in a game of Monopoly. “Sorry, I don’t know how to play,” I said, but leaned over to see what was going on.”Wait! That’s Shanghai Millionaire!” 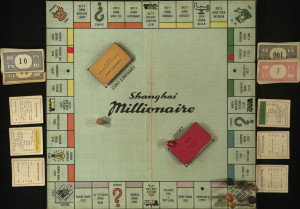 We used to play it all the time.” I cried. “Bubbling Well Road, Avenue Petain, Szechuan Road, the Bund, this is crazy; these streets are all different!”  Gambling must have been in our DNA, because we u 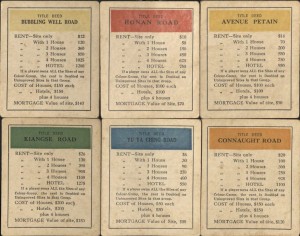 sed to play intensely, to win property at all costs. We all used to cheat non-stop.

The Shanghai Millionaire I knew had been pirated from the Parker Brothers company in the ‘30s and probably faded away after the war years. But, as the Wall Street Journal reported in 1987, it re- surfaced in the ‘80’s as “Strong Hand”,  produced by the Shanghai Lishen Toy fact 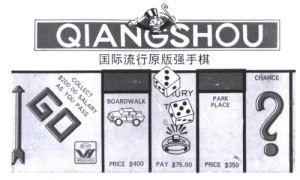 ory. The board is a direct copy of the original, but the tokens are wheelbarrows, the free parking space called Freedom Park, and players can’t pay a fine to get out of jail. “That would just encourage lawlessness “explains Lin Zhihui, a director of the toy factory. The game is a huge success, and has turned around the fortunes of the company, which once struggled, assembling equipment for a state telecommunications agency. By 1988, over 200,000 copies of the game were sold at about $2.70 each.

“By playing this game, people can learn about management and competition” (Liberation Daily.) “The game can help develop children’s intelligence, judgment and motor skills” (Shanghai Daily News.) “Everyone in China should be raised playing Monopoly,” says Yao Weiqun, deputy secretary general of the Shanghai Association of World Economy. “That way, everyone can understand how a market economy is supposed to work.” As China experiments with capitalism,  Shanghai citizens are doing what they once did best: making money.  Complaints by Parker that its copyright has been violated have been ignored by Lishen.  Surprising?  Not really,  by the bullying standards of the board game.

Photograph of  Qiangshou or Strong Hand from Boardgame geek