Thirty days before the Christmas holidays, a crèche was set up at one end of the entrance hallway at the Convent of the Sacred Heart, where I was an elementary school student. In winter, the hallway was dark, the stone floor cold, and the mustard colored walls beaded with humidity. 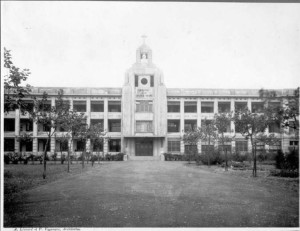 Above, low wattage bulbs were set in the ceiling at prudent intervals. They lit one’s way without cheer. What little color passed through this hall turned sepia in the process.
The crèche was not large and was faded from many years of use. But what was important was the cast and the props. Beyond the family in the shed, I sought and recognized each shepherd, kneeling or standing, his arms outstretched in wonder; the wise men, the star, each palm tree, the turfy carpet surrounding the whole. Each worshiper was placed at a proper distance from the sacred center, where the parents bent over the haloed child and the star beamed down gilded wooden rays.
I would crouch, as close as allowed by the boundary, gazing at, trying to penetrate the mysterious perfection of this scene. My heart brimmed with love and good intentions. Each year I prayed “Jesus, Mary and Joseph, let me be close to you. Please let me come close to you.”
Stretching away from the crèche, a long strip of carpet reached some distance along the hallway. At the end was a group of wooden sheep. Each one had a name tag on it for a child in the school. There would be about seventy five little sheep standing together on that first day, standing way out in dim, lonely space.
There I was, Joan K. There was another Joan, Joan deM. The sheep had once been identical. Now it was easy to tell them apart, by chips, blobs of repair paint, a gimpy leg giving a tilt to the stance, a painted eye replacing a glass one. A new sheep, substituting for one irreparably damaged, really stood out, shone, demanded a place in front. Being one of these would be a good omen, I felt. But I never was.
Each day a bevy of sheep moved forward a specified distance towards the crèche. Our teachers monitored this progress, noting our behavior moment by moment throughout the day. Decisions were made, and in the middle of the night (or so I guessed) sheep either moved forward or fell over on their sides right where they were standing. Good behavior the next day meant standing back up and moving ahead. In thirty days, each sheep COULD theoretically pass into the turfy enclosure for the righteous.I knew I belonged in the center; I knew I wanted to be with God. My love was a warm comforter that would puff around the pallid child and bring his color back to him. I was a very loving child, perplexed by the rules of the grown up world. Moving towards God each day seemed right; yet, falling over on my side and thereby falling behind became inevitable as the years passed. I fell over; that is, my symbolic self, God’s wayward lamb, fell over when I spoke impulsively to my neighbor during catechism class, when I mislaid one white glove, when I slurped my soup in the awful silence of the refectory, when I broke into a trot to get to an important destination in time, when I burst out laughing in the hallway, when I raised my voice in passion for any reason at all. Two petite sisters, Mignon and Mignonette, made it every year. They performed sleight of hand with white gloves. I could never make one look like two. I can’t even do that today, but I suppose M. and M. are still fooling the world with sly grace.
After falling over on its side a few times, one’s sheep just fell too far behind to ever make it. M. and M. took part in the transportation of the crèche and the winner sheep to the chapel where an annual in-group celebration was held. The rest of the sheep were scooped up and boxed till next year. 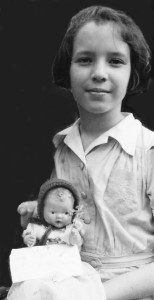 I can see myself, tall and stocky.  A fair skinned child, with straight brown hair fastened at one side with a plain barrette, glass clear eyes, a sincere, open face, big teeth, a hopeful smile. Why couldn’t I make it to that inner circle, that group of good girls, close to the holy family? My mother was short and dark, so was my Dad. In family photos, a phantom bubble came out of my mouth, asking, “Will my real parents claim me?”
How I tried! Yes, sometimes I would lunge. Sometimes I would slurp. My mother’s mahjong girlfriends would ask “How do you find shoes her size?” or comment: “well, she certainly didn’t last long in ballet school.”
My mother winced at reports of my school behavior. “She’s just naturally clumsy! Ballet school should help.” My Dad tried. “Lots of children in the world are crippled by polio, for instance. That’s really a problem.” Then he tried again “Or they are retarded. Being tall is really not that bad.” My mother added, “Just try not to slouch. It just makes it worse.” To give her credit, she hired a physical therapist to work with me for over a year on my posture, which really did help.
At the age of seventeen I left my parents definitively to go to college in the USA. This was my introduction to secular education. For the first time, I recognized my peers and they recognized me, as we stood eye to eye. I could begin to make my own rules; sometimes moving slowly and sometimes sprinting, but no one had the right to decide to knock me over in the middle of the night.

Photo of Joan and her doll’s first communion