Uncle Henry, as I knew him, was a familiar presence at the homes of my family’s circle, the French club, the tennis courts, the bridge tables.  He was a tall man with movie star looks, often compared to Gregory Peck,  and always impeccably dressed for the occasion. He was not a blood relation, but in Eurasian circles, families were extended to “went to school with” and “was engaged to” and so forth.  The link was the Western  ancestor, whether the person be English, Portuguese or Danish, for example, and a Chinese individual, usually a female.  Some Eurasian families had a short history, like my Dad’s: Danish father, Chinese mother. On my mother’s side, the mingled history went back further.  Her father was thought to be the product of an English seaman and a Chinese bar girl.  “Harvey” was the name on his birth certificate, though no Dad was around.  Her beautiful reddish haired mother was the daughter of a middle class Chinese midwife whose father, we recall, was an intellectual who refused to allow her feet to be bound.  An English employee of the East India Company met her at her father’s shop and was keen to marry this woman, notwithstanding her full size feet. Her father gave in, as he didn’t perceive any other marital possibilities.  A legal English and Chinese marriage was rare back in the 19th century; theirs was an apparent success.

I don’t know Uncle Henry’s background, except to note his presence everywhere. Uncle Henry loved children; especially little girls. He would coax me onto his lap more than once and when I was  installed,  managed to establish a strong grip around my abdomen. He would then somehow position my rear right against his crotch, cleverly spreading my legs to achieve a perfect fit.  He would continue his conversation with the group, always smiling pleasantly while commencing a subtle (at first) gyration.  In those days, men wore a suit comprising a capacious jacket and trousers, baggy by today’s standards.  In the winter, a loose sweater was worn over shirt and undershirt.  A four or five year old body didn’t have a chance enveloped in all this clothing.  I could begin to hear a slight moan or hum coming from Henry and a definite massaging movement of something hardening between my thighs. His hands seemed to be moving around, too.  It was not altogether unpleasant, but if there was a strong controlling element to this; an insistent quality,  I would want to get away.  No one seemed to notice anything, so I had to made a sudden move, using my elbows and sliding forward, landing on the floor, with a thump. “What’s the matter?” my mother would say to me irritably, “don’t be so clumsy!”  Uncle Henry would smooth his clothing and try to help me back on his lap,  but by then, I was away.  I received very little affection in my life, so it felt as if Henry cared about me.  I enjoyed his attention, to a point.  He had a hugging technique as well.  He would grab a child by the armpits and grasp her to his body with exclamations like “what a gorgeous big girl you’ve become,” etc.  Of course, he always had pockets full of candy; you had to be ready to root in those trouser pocket for these goodies.   I was certainly  not the only lap victim.  Uncle Henry would often be hugging or holding a bemused looking child; he’d even go down to the kitchen and fool around with the servants’ children. They normally never got candy, so he was  very welcomed.  Henry had no children of his own.  He was married to Thelma, a homely, dowdy Japanese woman.  She didn’t speak much English, the lingua franca of Eurasians, and she scowled and frowned a lot, but she always accompanied Henry to social occasions.  Their relationship must have been what saved him from a stint in concentration camp.

My cousin, Sylvia and I were the same age, though I was much bigger. 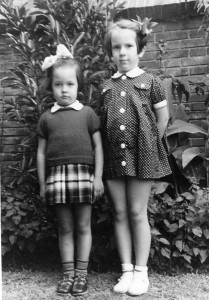 We were friends at the age of five or six, and she stayed over from time to time.   We were in my big bed under the mosquito net.  It was such a hot night, we had taken off our pj,s. and just lay there under the overhead fan not able to fall asleep.  We started idly to explore each other’s bodies.  Nipples were interesting to wiggle and pinch. Belly buttons…one inny and one outy….also interesting.  We turned to face each other’s crotch and investigated with our fingers, then hesitatingly with our tongues.  It felt very natural…and soon we began to feel sleepy, rolled over and fell asleep.  We never thought to talk about how we had touched each other,  and we didn’t have any inclination to repeat this investigation. One day the subject of Uncle Henry came up and we both chortled about him, and our techniques for avoiding close contact with him.

“I saw someone’s thing,” I said.  “It was ugly.  I was supposed to touch it but I wouldn’t.”   This belonged to a Russian man who lived in a ground floor flat a few blocks away.  He was often at one of his windows, which opened on the street.  He’d be holding onto a chocolate bar or some toy, or even a few dollar bills, waving to children walking past as we did, unsupervised, in those days.  I recall going in with a couple of other children five years old, or older.  Alexey lay in bed with a table of “medical supplies” next to him and proposed we play hospital.  He seemed very old and wrinkled with pale, mottled skin.  Scraggly grey hair grew on his chest and groin area.  He wore an open kimono, exposing the whole front of his body.  He flopped up and down on his bed as he pointed to his so called wound.  A nurse (one of us, of course) was supposed to apply cream to it.  A boy said “I’ll do it grandpa; give me the money first.”  I was transfixed as the boy picked up the flaccid muscle lying on the man’s thigh, and  pumped up and down with the “Medical Cream” until it gradually became upright; a thick, veiny…well, “thing” was all I knew to call it.  Alexey began to groan, at which point a couple of us grabbed a few candies and ran out of the building,  laughing nervously.

“What was it like?”  asked Sylvia.  It was hard for me to have an opinion. I knew instinctively it was not something I could mention to my parents. I just said “It was not nice. It was ugly and scary.” My parents had separate quarters, and I recall my mother letting out a scream when my Dad unexpectedly appeared at her door while she was just wearing underwear.  I never saw them in anything approaching an embrace.  When the topic of sex came up,  my mother once offered “women just have to grin and bear it.”

The following year I witnessed some boys in the expansive garden of the apartment building behind my house.  They were gathered under some shrubs with a girl everyone knew was retarded.  They had removed her panties and spreadeagled her on her back right on the ground.  She whimpered a little but didn’t object as one boy poked a stick into her vagina.  Again, I was transfixed as they turned her over and started prodding their fingers into her anus.  She started to giggle, then.  At that point I ran home.  I needed to hide, and I vowed I wasn’t going anywhere near that garden again.  But I had been curious, even fascinated.

Most parents, even today, have no idea of their children’s early exposure to sex.  I believe all kids have been molested at some time or other by adults or other children.  Unless badly damaged, we pick ourselves up and move on.  Childhood itself is a concept that did not catch on till perhaps the 20th century. It still hasn’t caught on in many societies.  Children were just belongings of their parents or guardians and had no rights whatsoever. They could be forced to hard labor and  sex at any age. They could be beaten even to death, and sold at their parents’ will.

And that’s the summary of one tot’s  sexual education.