My mother’s mink coat was a very big deal. It was an expensive anniversary gift from my father; full length, luxurious and lined in satin. In the lining, dozens or maybe hundreds of mink tails were sewn in, in semicircles. Was it to prove how many minks died for my mother’s pleasure? I never found out, but I recall creeping into her closet when she was out, and wrapping myself in the coat, and playing with the tails and imagining I was tobogganing through the Arctic wrapped in fur. But this not my story; it’s about how the coat happened to be in my aunt’s apartment when my mother absolutely had to have it and sent my ever patient father out to retrieve it.
As he tells it: “I was halfway home and just forgot about the blasted curfew when the sirens went off. The streets emptied out and there I was, hauling the huge coat, when suddenly the Japanese military appeared all around me. They weren’t joking; they had their bayonets out, they were yelling

…I thought I was a goner, when suddenly their commandant appeared. You won’t believe this!” I clung onto my Dad’s knees. He had just come through the garden gate, and had dropped onto the steps to the house.
“What! What!” My mother had snatched up her coat off the ground, “What, Hans?”
Dad started laughing, “The commandant was Ogawa! He was all dressed up in military gear; he looked ridiculous.”
Mr. Ogawa had been one of my father’s closest business acquaintances pre-war, also a drinking partner. They had even gone to Japan together to climb Mount Fuji. He and Ogawa had wanted to turn back half way but it was impossible. An impenetrable human chain, behind and in front, forced them to slog to the summit to meet daybreak. This experience was shared often with friends over whiskeys at the Club. 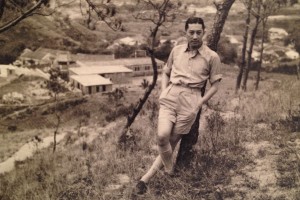 “Hans, what the hell are you doing out here” Ogawa exclaimed “You could be killed.” My Dad replied “I had to go and get Di’s coat. She had to have it; you know what she’s like!” Ogawa had to agree. He took Dad roughly by the arm, and shouted to the militia that he would take care of the situation, grabbed the coat and marched my father the three or four blocks to our house. “Don’t ever try anything like this, Hans. I can’t pull this off again.” Dad said he had to appear to be shoved or punched before being thrust through the door. “I really miss those evenings at the Cercle Francais with Ogawa and the other fellows” my Dad mused. The Cercle was the only Western club open to Eurasians and Asians before the War.

photo of a Japanese commandant from Virtual Shanghai

photo of Dad hiking in Japan