The cheapest and most efficient way of sending mail locally was by chit book coolie. Every commercial establishment had one or more. A ledger was used to enter the date, name of addressee, and address. The chit book coolie would then deliver the mail by bike, tram or foot. The receiver signed for its receipt in his company’s ledger. At our office, I would get in touch with my sisters or friends in this way. This was how, Jack, my boyfriend at the time, sent me notes from the police station where he an officer on duty. 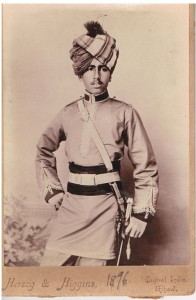 His messenger was a very tall Sikh Havildar on the mounted police staff. He wore a full uniform with a red/gold turban, red cummerbund, chain mail epaulets, spurs and hob-nailed boot, and would march solemnly to my desk and hand me the letter, my co workers trying to suppress their giggles. I would later see him riding in ceremonies with an upright lance. We knew each other well by then, I could tell he recognized me with a barely perceptible nod.
Jack and I were in love and wanted to marry. We’d been together for two years. But first, as an Englishman, he was required to take home leave before he was allowed to marry. 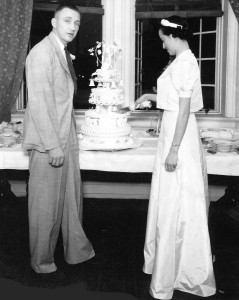 This was to encourage him to find a suitable girl back home to marry and to bring back to his post abroad. This system worked quite well, so I was afraid to meet the boat when Jack returned from leave. From what everyone told me, I was pretty sure he would have a wife with him. But, no, he didn’t and we were married soon after, in 1937.

The Japanese occupation happened suddenly. We had wars every five years: 1927, the Nationalist vs. the Communists; 1932, Battle of Shanghai between the Japanese and Chinese, 1937, the Sino-Japanese War, and then 1941. We were used to wars, so one day we when we woke up and the Japanese were everywhere, we were startled but not surprised. What was surprising was the rapid and efficient takeover, obviously well planned. The whole city, including the huge 4,000 prisoner jail where Jack was employed, was occupied at once.

All enemy nationals were issued numbered arm bands which we had to wear at all times. For once, Eurasians, who had had to suffer lesser pay,  lack of promotion and exclusion from clubs, were equal to the real Yankees and English. All enemies had to stand in buses, bow to Japanese and observe strict curfews. In fact, curfews applied to all foreigners.
After a year of occupation, the Japanese opened internment camps on the outskirts of the city. Our homes were invaded by the military and all our cabinets and closets were sealed with the Imperial Seal to prevent us from removing their contents. These seals were flimsy strips of paper, but if disturbed would mean serious consequences. We were then herded in trucks with pretty much all we were wearing and taken to Yu Yuen camp.
When the war ended, like many others we returned to our homes to find them completely stripped of every piece of furniture, everything. Our flat was an empty shell. We had to start all over, Jack and I and our seven year old son, John.

photo of a Sikh Havildar

photo of Jack and Phyl’s armbands